The Young Lady'S Mentor (Fiscal Part I) A Guide To The Formation Of Character. In a Series Of Letters To Her 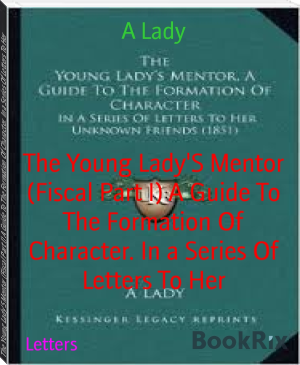 The Work Which Forms The Basis Of The Present Volume Is One Of The Most
Original And Striking Which Has Fallen Under The Notice Of The Editor.
The Advice Which It Gives Shows A Remarkable Knowledge Of Human
Character, And Insists On A Very High Standard Of Female Excellence.
Instead Of Addressing Herself Indiscriminately To All Young Ladies, The
Writer Addresses Herself To Those Whom She Calls Her "Unknown Friends,"
That Is To Say, A Class Who, By Natural Disposition And Education, Are
Prepared To Be Benefited By The Advice Which She Offers. "Unless A
Peculiarity Of Intellectual Nature And Habits Constituted Them Friends,"
She Says In Her Preface, "Though Unknown Ones, Of The Writer, Most Of
The Observations Contained In The Following Pages Would Be
Uninteresting, Many Of Them Altogether Unintelligible."