STUDIES ON LEGEND OF HOLY GRAIL

WITH ESPECIAL REFERENCE TO THE HYPOTHESIS OF ITS CELTIC ORIGIN By: ALFRED NUTT 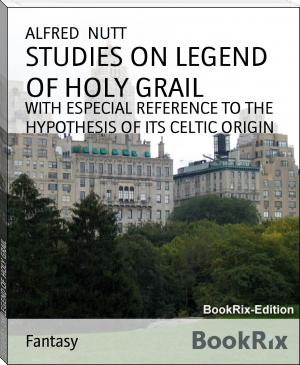 Nutt was born in London, the eldest son of David Nutt, a London publisher. His mother was the granddaughter of another well-known publisher, William Miller. He was educated at University College London School and College de Vitry-le-François, in Maine, France. He spend three years serving a business apprenticeship in Leipzig, Berlin and Paris before taking over his late father's business in 1878. Nutt founded The Folk-Lore Journal (now Folklore).[1] He was elected president of the Folklore Society in 1897.[2]

He was a friend and supporter of Jessie Weston, sharing her interest in Celtic origins of the Grail legend, and publishing some of her books. He was also associated with Whitley Stokes, Eleanor Hull and Kuno Meyer and his work had a substantial influence on the scholarship ofRoger Sherman Loomis.[3] Nutt was also instrumental to the establishment of the Irish Texts Society and his firm published the early volumes of Society from 1899 to 1914.

He produced numerous works of scholarship in his own right, including Studies on the legend of the holy grail, with special reference to the hypothesis of its Celtic origin and his collaboration with Meyer on The Voyage of Bran, Son of Febal, to the Land of the Living. He also wrote studies of the Mabinogion, the grail and was working on an annotated edition of Matthew Arnold's Study of Celtic Literature at the time of his death.[1]

He was drowned in the Seine on 21 May 1910 while attempting to rescue his invalid 17-year-old son who had been dragged into the river when his horse bolted.[2] His wife, M. L. Nutt succeeded him as head of the firm.