The Nature and Practice of Yoga 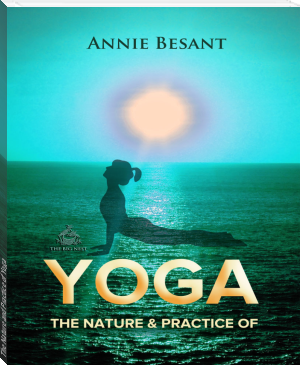 Yoga is a science, and not a vague, dreamy drifting or imagining. It is an applied science, a systematized collection of laws applied to bring about a definite end. It takes up the laws of psychology, applicable to the unfolding of the whole consciousness of man on every plane, in every world, and applies those rationally in a particular case. This rational application of the laws of unfolding consciousness acts exactly on the same principles that you see applied around you every day in other departments of science. You know, by looking at the world around you, how enormously the intelligence of man, co-operating with nature, may quicken "natural" processes, and the working of intelligence is as "natural" as anything else. We make this distinction, and practically it is a real one, between "rational" and "natural" growth, because human intelligence can guide the working of natural laws; and when we come to deal with Yoga, we are in the same department of applied science as, let us say, is the scientific farmer or gardener, when he applies the natural laws of selection to breeding. The farmer or gardener cannot transcend the laws of nature, nor can he work against them. He has no other laws of nature to work with save universal laws by which nature is evolving forms around us, and yet he does in a few years what nature takes, perhaps, hundreds of thousands of years to do. And how? By applying human intelligence to choose the laws that serve him and to neutralize the laws that hinder. He brings the divine intelligence in man to utilise the divine powers in nature that are working for general rather than for particular ends.

So is it in the application of the laws of psychology that we call Yoga. Systematized knowledge of the unfolding of consciousness applied to the individualized Self, that is Yoga. As I have just said, it is by the world that consciousness has been unfolded, and the world is admirably planned by the LOGOS for this unfolding of consciousness; hence the would-be yogi, choosing out his objects and applying his laws, finds in the world exactly the things he wants to make his practice of Yoga real, a vital thing, a quickening process for the knowledge of the Self. There are many laws. You can choose those which you require, you can evade those you do not require, you can utilize those you need, and thus you can bring about the result that nature, without that application of human intelligence, cannot so swiftly effect. Take it, then, that Yoga is within your reach, with your powers, and that even some of the lower practices of Yoga, some of the simpler applications of the laws of the unfolding of consciousness to yourself, will benefit you in this world as well as in all others. For you are really merely quickening your growth, your unfolding, taking advantage of the powers nature puts within your hands, and deliberately eliminating the conditions which would not help you in your work, but rather hinder your march forward.