The System Of Nature, Vol. 2 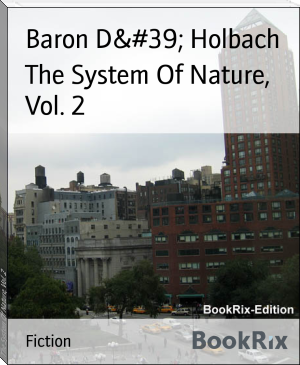 Paul-Henri Thiry, Baron d'Holbach (French: [dɔlbak]; was a French-German author, philosopher, encyclopedist and a prominent figure in the French Enlightenment. He was born Paul Heinrich Dietrich in Edesheim, near Landau in the Rhenish Palatinate, but lived and worked mainly in Paris, where he kept a salon. He was well known for his atheism[2] and for his voluminous writings against religion, the most famous of them being The System of Nature (1770).
Sources differ regarding d'Holbach's dates of birth and death. His exact birthday is unknown, although records show that he was baptised on 8 December 1723.[citation needed] Some authorities incorrectly give June 1789 as the month of his death.