Dedicated to all who fight for democracy for, of, and by the people. By: Bob Swartzel 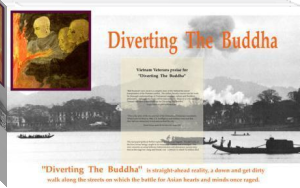 A timely thriller about CIA dirty tricks! One that explores the most feared sentence in the English language: “hello I am from the U.S. government with democracy for you people”.

Diverting the Buddha is a timely thriller that describes how American elites treat emerging democracies as a form of social cancer. It is the Year of the Fire Horse, democracy is beleaguered, and only the Buddha can help a war weary people. This fast-paced adventure follows the struggles of four characters caught in a web of wartime intrigue. In the end, all four wander into harm’s way, during an all out explosion of murderous betrayal.

A major theme of the novel is betrayal—of individuals, of the democratic aspirations of pro-democracy people, of Americans, and of betrayal of truth itself. Historian David Heiser

I found the read enjoyable. I thought the first chapter was excellently done, but then the next few chapters seemed to drag a bit as you introduced all the characters. After that, it picked up again.

All in all, I'd recommend it.