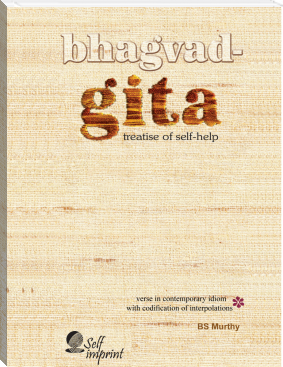 The spiritual ethos and the philosophical outlook that the Bhagvad - Gita postulates paves the way for the liberation of man, who, as Rousseau said, ‘being born free, is everywhere in chains’. But equally it is a mirror of human psychology, which enables man to discern his debilities for appropriate redressal. All the same, the boon of an oral tradition that kept it alive for over two millennia became its bane with the proliferation of interpolations therein. Besides muddying its pristine philosophy, these insertions affect the sequential conformity and structural economy of the grand discourse. What is worse, to the chagrin of the majority of the Hindus, some of these legitimize the inimical caste system while upholding the priestly perks and prejudices. This rendition seeks to restore to the Gita, its original character by ridding it of hundred and nine interpolations, which tend to keep the skeptics away from it. And ironically these muddle the understanding as well. In the theatre of man as nothing surpasses the drama of war, the stage for unveiling the Gita’s unrivalled philosophy was set on the battleground of Kurukshetra at the threshold of the battle of Mahabharata.

Hello sir, I am currently reading your work and I love it. Indian history and world religions are of literary interest to me. I especially like your quote from Rousseau in the beginning. I think it really helps set the stage.

Thank you though belatedly (I'm sorry) and I hope you enjoyed it.