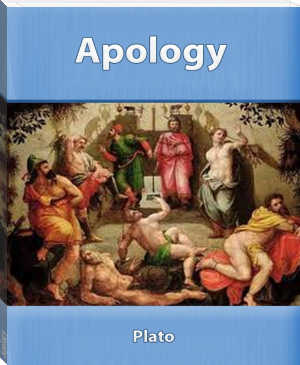 Apology is Plato's version of the speech given by Socrates as he defended himself in 399 BC against the charges of "corrupting the young, and by not believing in the gods in whom the city believes, but in other daimonia that are novel."

Socrates begins by telling the jury that their minds were poisoned by his enemies when they were young and impressionable. He says his reputation for sophistry comes from his enemies, all of whom are envious of him, and malicious. He says they must remain nameless, except for Aristophanes, the comic poet. He later answers the charge that he has corrupted the young by arguing that deliberate corruption is an incoherent idea. Socrates says that all these false accusations began with his obedience to the oracle at Delphi. He tells how Chaerephon went to the Oracle at Delphi, to ask if anyone was wiser than Socrates. When Chaerephon reported to Socrates that the god told him there is none wiser, Socrates took this as a riddle. He himself knew that he had no wisdom "great or small" but that he also knew that it is against the nature of the gods to lie.

Socrates then went on a "divine mission" to solve the paradox (that an ignorant man could also be the wisest of all men) and to clarify the meaning of the Oracles' words. He systematically interrogated the politicians, poets and craftsmen. Socrates determined that the politicians were imposters, and the poets did not understand even their own poetry, like prophets and seers who do not understand what they say. Craftsmen proved to be pretentious too, and Socrates says that he saw himself as a spokesman for the oracle (23e). He asked himself whether he would rather be an impostor like the people he spoke to, or be himself. Socrates tells the jury that he would rather be himself than anyone else.