An Inquiry into Illegal File Sharing By: Christopher Stewart 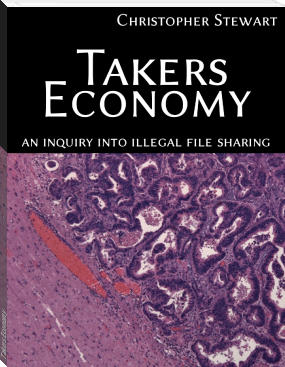 Over the last decade or so, file sharing has become a widespread phenomenon. As much as having the possibility of exchanging information almost instantaneously can represent a blessing in terms of communication and progress, it obviously opens the door to pursuits that enjoy a far less angelic reputation.

Still, the overall picture suggests that a significant number of internet users participate in such ill-famed activities. Considering this state of affairs, could illegal file sharing actually be a positive process for those downloaders, and for the collectivity alike ?

The question is generally approached from the angle of its economic impacts, but there is evidently more to the issue than its pecuniary dimension.

« Takers Economy » proposes an alternative look at illegal file sharing in light of the role of art in society, and in the context of the oneness of all beings and things.

In addition, the inquiry explores the global picture from which the circumstances emerge, and attempts to characterize the underlying culture that gives rise to them.

Finally, the essay introduces a philosophy of endosymbiotism that aims to foster attitudes and behaviours that accord with the ethics of the inherent unseparateness of being.

Read Book
Book Recommendation
It was meant to be this way