The Giants' Battle By: Claus Birkholz 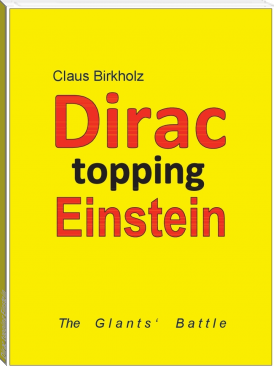 Einstein's relativity is without spin and not irreducible; his black holes are singular. In an inconsistent way, Dirac supplemented spin, Feynman virtual intermediate states.

Now, the key issue of natural sciences is reproducibility, that of a measuring process its impossibility to count up to infinity, and that of statistics the law of great numbers. Shell models satisfy Pauli's exclusion principle. Bell's superdeterminism reconciles Einstein's "spooky action at a distance" (entanglement) with causality in terms of a thermodynamic 2-channel system giving rise to non-singular black-hole dynamics and to a new definition of what is "macroscopic".

The present paper rather is sketching the logic of Quantum Gravity, less its mathematical details. Particles and universes are described by the same "world formula" unifying General Relativity with quantum field theories and Gell-Mann's quarks and leptons to a common New Physics in 4 quantised bent spacetime directions.

The "internal" (chiral) structure of nature is traced back to some next-inferior "Matryoshka level" of Quantum Gravity, with its 2**3 = 8 parity sections reproducing the 3-dimensional substructure of quark confinement.

The measuring process is reduced to mere applications of (unitary) rotations triggered by the measuring device. Dark energy and dark matter are trivial by-products. For a consistency check of New Physics, the fine-structure constant is calculated explicitly. The non-valence structure of particles is derived.

Lagrange formalism, canonical quantisation, and the spin-statistics theorem prove to be classical dead ends of times long past.