An Account Of the English Colony In new South Wales, Vol. 1 Fiscle (Part-I) 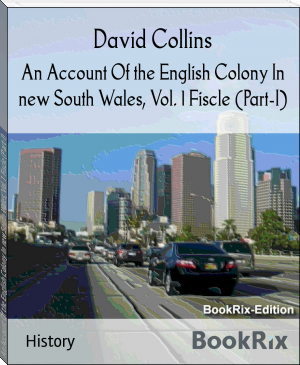 David Collins (1756-1810), deputy judge advocate and lieutenant-governor, was born on 3 March 1756 in London, the third child of Arthur Tooker Collins, an officer of marines and later major-general commanding the Plymouth Division, and his wife Henrietta Caroline, née Fraser, of Park, King's County, Ireland. His grandfather, Arthur Collins (1684-1760), with Abel Roper, in 1709 issued the first edition of Collins's Peerage of England. David probably attended the Exeter Grammar School under John Marshall, and at 14 joined his father's division as an ensign. He was promoted second lieutenant on 20 February 1771, and next year served in H.M.S. Southhampton when Queen Matilda of Denmark was rescued. About March 1775 he left for North America and was at the battle of Bunker's Hill on 17 June when the British suffered heavy losses, especially of commissioned officers, but occupied the heights of Charlestown. A week later he was promoted first lieutenant and by November 1776 was stationed at Halifax, Nova Scotia. Here at the Church of St Paul on 13 June 1777 he married Mary (Maria Stuart), daughter of Captain Charles Proctor. By that time Collins had become adjutant in the Chatham Division. He was promoted captain-lieutenant in August 1779, captain in July 1780, and in February 1781 joined the Courageux in the Channel Squadron. He hated 'the salt sea ocean' and with relief returned to Chatham in January 1783; in September he was placed on half-pay.