A Book For Young Programmers On Scratch. 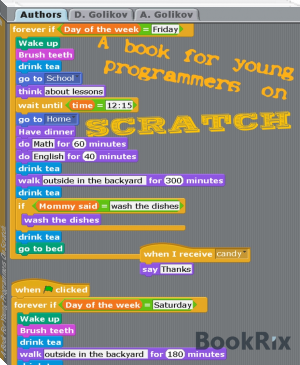 Scratch Programming In Very Step By Step Examples. The goal of the book is introduction into programming, mathematics, sciences for elementary school students.
The material is written for student self-study for Grade 3-5 students. Scratch is a new free programming environment that allows children from 7 years old to create their own stories, cartoons, games and other creation.
How the book was created.
I am 37 years old. My background is in Computer Engineering, not in Programming. My son, Artem, got into programming on Scratch at 7 years of age. I started looking for books on Scratch on the Internet for children of 7-9 years old, but I could not find anything. All Scratch textbooks are for 11-13 years old children, though there is nothing difficult in Scratch. Having basic Math knowledge it is possible to use more than half of Scratch capabilities and make cool games and cartoons. After Artem had mastered Scratch, he got very upset once he learned that they would not be studying it at school and that other children, his friends and classmates would never learn about this interesting program. I made a decision to sacrifice my Sunday evenings to organize a club of programmers on Scratch. And so a year ago my son and I started teaching a club of young programmers on Scratch for kids of 8-11 years old. For each class Artem would think of a new game that would use new Scratch blocks. As a result, we have collected enough material for a whole book. In the fall of 2013 new children came to the club and the book was tested on them. The children made a few comments, I explained complex points in more detail, and now the book is published. Some children have already studied the whole book and are asking for a continuation! As of November 2013, the second book is already half finished. The children like studying the book a lot, because everything has been explained in great detail and does not require their parents' participation. The parents also like it because they can do their chores in the meantime.
All the examples from the book are published on the Scratch website.

Scratch was created in 2006 under the supervision of Mitchel Resnick by a Lifelong Kindergarten group in MIT Media Lab.
Scratch works on Windows or Linux computers. It doesn't work on any tablets!
Each chapter requires about 20-30 minutes to study. It is not recommended to study more than two chapters per day.