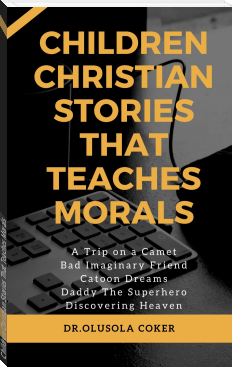 This book contains five stories that teach children morals. In this book, children will learn more on The Sabbath Day, Danger in Lying, Is Idolatry Bad?,  Honor your Father and Mother, Heaven.

A Trip on a Comet Value:  The Sabbath Day “God is going to hear you talking about that Tommy and he won’t like it.”  Steve told his best friend as they were going to school Monday morning. “Well I don’t get it.  What is Sunday even good for anyway?  I don’t get it.  We go to church every Sunday but nobody knows why.

Maybe it’s just a bunch of goofy rules the church made up so why should we do it anyway?”  Tommy said in a snotty way.  Tommy really was a good boy.  He loved God and his family and all those things but sometimes he just had questions and he wanted someone to tell him the truth.  Lots of us are like that. “Tommy, be careful.  If you keep asking those kinds of questions, well God can hear you.”  Steve said but Tommy said “fine” and he meant it.  He didn’t care if God did hear him.  If God wanted to show him why Sunday was important, that would suit Tommy just fine.  Tommy thought about it all day at school.  As he walked out onto the playground after school, he noticed that all of a sudden, there were not any other kids around.

As he came around the corner to the bicycles racks, he stopped short.  He faced the biggest pair of feet he ever saw.  They had sandals and they together were so wide, he had to turn his head to see from one toe to the other.  Slowly Tommy’s eyes followed up the massive legs to the edge of a huge white robe, on up the big body to a huge beaming face that was all white with a glow like it has a light bulb inside of it.  Behind each shoulder, he saw the edges of a huge angel’s wing. “Hello Tommy, you ready to go?”  The angel said with a deep voice that seemed to fill every inch of the air for miles around. “Who are you?”  Tommy asked feeling it was a pretty good question. “I am Gabriel.  I am the chief Angel of God.  Are you ready to go find out why there is a Sunday?”  Gabriel answered in a kind but firm voice. “Where are we going?”  Tommy wanted to know. “You will see when we get there.”  The angel answered. “How will we get there?”  Tommy continued. “Well by comet of course.  See?”  And Gabriel gestured over to the swing sets where he had tied up to the jungle gym a steaming, flaming, very angry comet that didn’t like being tied up and it wanted to go right now. “Well I……….”  Tommy hesitated but he didn’t have time to finish deciding because in a flash he was holding on for dear life.

This is the great negotiator? This is the great deal maker? He announces on
twitter, like some 3rd grade bully, that he is imposing new tariffs on steel &
aluminum. He did this without discussing it with any trade partner and/or
ally. I was under the impression that you would need to include the other
parties involved to make a deal or negotiate. He is not the brightest bulb on
the tree is he?

This is the great negotiator? This is the great deal maker? He announces on
twitter, like some 3rd grade bully, that he is imposing new tariffs on steel &
aluminum. He did this without discussing it with any trade partner and/or
ally. I was under the impression that you would need to include the other
parties involved to make a deal or negotiate. He is not the brightest bulb on
the tree is he?