A KNIGHT OF THE NINETEENTH CENTURY 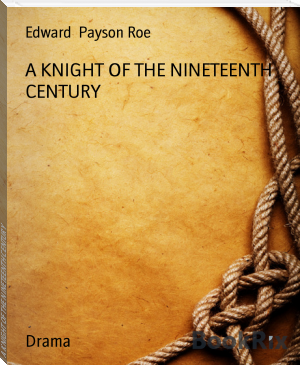 Edward Payson Roe was born in Moodna[disambiguation needed], Orange County, New York. He studied at Williams College and at Auburn Theological Seminary. In 1862 He became chaplain of the Second New York Cavalry, U.S.V., and in 1864 chaplain of Hampton Hospital, in Virginia. In 1866-74 he was pastor of the First Presbyterian Church at Highland Falls, New York. In 1874 he removed to Cornwall-on-Hudson, where he devoted himself to the writing of fiction and to horticulture. During the American Civil War he wrote weekly letters to the New York Evangelist, and subsequently lectured on the war and wrote for periodicals.Edward Payson Roe (March 7, 1838 – July 19, 1888) was an American novelist.

This leave me speachless. It was just so great. If you have some great stories like this one, you can publish it on Novel Star, just submit your story to hardy@novelstar.top or joye@novelstar.top

Add to Favorites
Book Recommendation
Secret Melody of the Sea