The Garden of Bright Waters 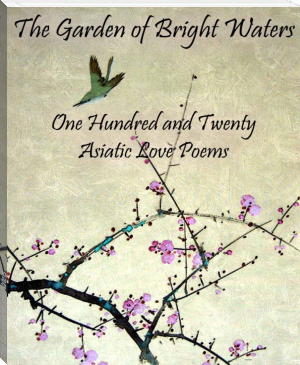 The Garden of Bright Waters: One Hundred and Twenty Asiatic Love Poems from various authors was translated by Edward Powys Mathers (1892–1939). He was an English translator and poet, and also a pioneer of compiling advanced cryptic crosswords. Powys Mathers was born in Forest Hill, London, the son of a newspaper proprietor. He was educated at Loretto and Trinity College, Oxford.

I am hoping that some readers will look on this collection primarily as a book of poems. The finding and selection of material and the shaping of the verses is my principal part in it. Most of the songs have been written from, or by comparing, the literal translations of French and Italian scholars, checked wherever possible by my own knowledge. When my first and very great debt to these has been stated, there remains my debt to the late John Duncan, to Mr J. Wing, and to a friend, a distinguished writer both in Persian and Turkish, who wishes to remain unnamed. The kindness of these writers lies in trusting their work to my translation and helping me in that task. My book also owes much to suggestions prompted by the wide learning of Mr. L. Cranmer-Byng. My final debt is to him and to another generous critic. I have arranged my poems in the alphabetical order of their countries, and added short notes wherever I considered them necessary, at the instance of some kindly reviewers of an earlier book, which was not so arranged and provided.