A GUIDE TO THE NAMES, HAUNTS AND HABITATS OF OUR COMMON FERNS 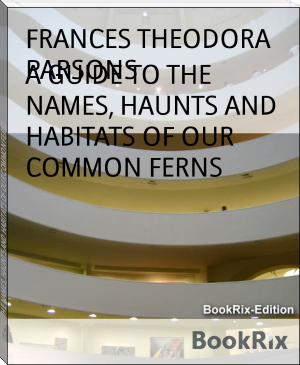 Frances Theodora Parsons (née Smith (December 5, 1861 – June 10, 1952), usually writing as Mrs. William Starr Dana was an American botanist and author active in the United States during the late 19th and early 20th centuries. Her first husband, William Starr Dana (marriage 20 May 1884, died 1 January 1890), was a naval officer. She later married (8 February 1896) James Russell Parsons, a politician in the state of New York and later a diplomat. They had a son, Russell. She was an active supporter of the Republican Party as well as the Progressive Party. She was also an advocate of women's suffrage. Her most important botanical work was How to Know the Wild Flowers (1893), the first field guide to North American wildflowers. It was something of a sensation, the first printing selling out in five days. How to Know the Wild Flowers garnered favorable responses from Theodore Roosevelt and Rudyard Kipling, among others. The work went through several editions in Parsons's lifetime and has remained in print into the 21st century