A PLAIN INTRODUCTION TO THE CRITICISM OF THE NEW TESTAMENT, VOL. II 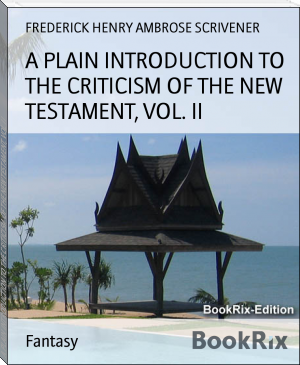 The Reverend Frederick Henry Ambrose Scrivener, LL.D. (September 29, 1813, Bermondsey, Surrey – October 30, 1891, Hendon, Middlesex) was an important text critic of the New Testament and a member of the English New Testament Revision Committee which produced the Revised Version of the Bible. He was prebendary of Exeter, and vicar of Hendon.

Graduating from Trinity College, Cambridge in 1835 after studying at Southwark,[1] he became a teacher of classics at a number of schools in southern England, and from 1846 to 1856 was headmaster of a school in Falmouth, Cornwall. He was also for 15 years rector of Gerrans, Cornwall.