A Knight Of The White Cross 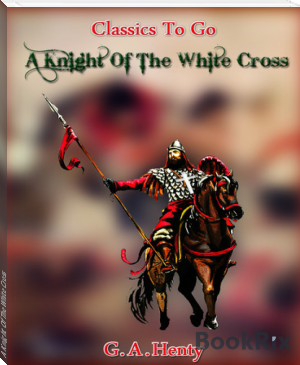 George Alfred Henty (8 December 1832 – 16 November 1902), was a prolific English novelist and a special correspondent. He is best known for his historical adventure stories that were popular in the late 19th century. His works include The Dragon & The Raven (1886), For The Temple (1888), Under G.A. Henty was born in Trumpington, near Cambridge. He was a sickly child who had to spend long periods in bed. During his frequent illnesses he became an avid reader and developed a wide range of interests which he carried into adulthood. He attended Westminster School, London and later Gonville and Caius College, Cambridge,[1] where he was a keen sportsman. He left the university early without completing his degree to volunteer for the Army Hospital Commissariat when the Crimean War began. He was sent to the Crimea and while there he witnessed the appalling conditions under which the British soldier had to fight. His letters home were filled with vivid descriptions of what he saw. His father was impressed by his letters and sent them to The Morning Advertiser newspaper which printed them. This initial writing success was a factor in Henty's later decision to accept the offer to become a special correspondent, the early name for journalists now better known as war correspondents.

Shortly before resigning from the army as a captain in 1859 he married Elizabeth Finucane. The couple had four children. Elizabeth died in 1865 after a long illness and shortly after her death Henty began writing articles for the Standard newspaper. In 1866 the newspaper sent him as their special correspondent to report on the Austro-Italian War where he met Giuseppe Garibaldi. He went on to cover the 1868 British punitive expedition to Abyssinia, the Franco-Prussian War, the Ashanti War, the Carlist Rebellion in Spain and the Turco-Serbian War.[2] He also witnessed the opening of the Suez Canal and travelled to Palestine, Russia and India.Drake's Flag (1883) and In Freedom's Cause (1885).