A CONTRIBUTION TO THE PHILOSOPHY OF HISTORY 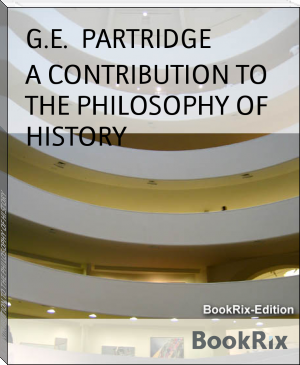 George Everett Partridge (31 May 1870, Worcester, Massachusetts - November 1953, Baltimore) was an American psychologist credited with popularizing the term sociopath. He worked with the influential G. Stanley Hall at Clark University.
Partridge's PhD and early work focused on the psychology of using alcohol and other intoxicants. He surveyed historical patterns of use, including in religious and social contexts, and considered why there may be a human 'intoxication impulse'. He conducted his own research experiments on the effects of alcohol, in which he found opposite effects to those reported by the influential German psychiatrist Emil Kraepelin. Partridge's interest stemmed from a "desire to test the value of psychological methods in dealing with certain ethical problems. Any one of a large number of impulses which are important because they determine morbid conduct might have been chosen for similar study, as for example, the gambling impulse, envy and jealousy, or the sexual impulse.