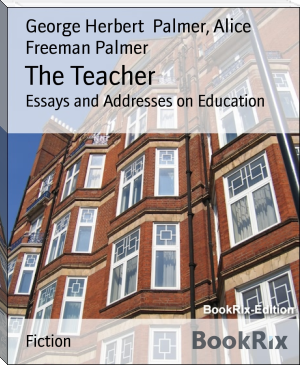 George Herbert Palmer (March 9, 1842 – May 8, 1933)[1] was an American scholar and author, born in Boston. He attended Phillips Academy, Andover, and in 1864 he graduated at Harvard, to which he returned, after study at Tübingen, Germany, and at Andover Theological Seminary, to be tutor in Greek. He became Alford professor of natural religion, moral philosophy, and civil polity at Harvard (1889–1913). In 1887, he married, as his second wife, Alice Freeman Palmer. While at Harvard, Professor Palmer lived in Dana-Palmer House, which now bears his name. Professor Palmer received honorary degrees from the University of Michigan, Union, Dartmouth, Western Reserve, and Harvard.

Alice Freeman Palmer (February 21, 1855 – December 6, 1902) was an American educator. As Alice Freeman, she was Principal of Wellesley College from 1882 to 1887, when she left to marry the Harvard professor George Herbert Palmer. From 1892 to 1895 she was Dean of Women at the newly founded University of Chicago.