A Compilation Of The Messages And Papers Of The Presidents,Volume Ix. 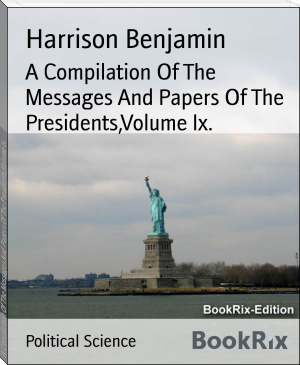 The Compilation of the Messages and Papers of the Presidents is an eleven-volume series of tomes comprising proclamations, special messages, and inauguration speeches from several presidents throughout United States history. There are ten numbered volumes[1][2][3][4] each covering a set of presidents between the years of 1787 and 1902 and an eleventh index volume. It was copyrighted in 1897, by James D. Richardson, a representative from the state of Tennessee, and was published in 1911, by the Bureau of National Literature and Art. There is also a supplement version that covers individual presidents in depth and was published, also by the Bureau of National Literature, but in 1917. A typical volume has the Seal of the President emblazoned in the front and the back. The original first edition was printed in 1899 by the Government Printing office in Washington DC. Only 6,000 copies were printed and presented to members of the congress and senate for reference. Two thousand for the use of the senate and four thousand for the use of Congress. 1911 was the third printing and contained 20 volumes. There was no vol eleven in the first printing. The index is contained in the volumn ten. These volumns are brown and have no seal .