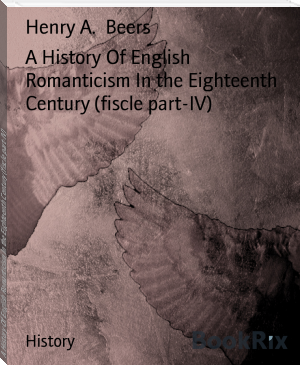 Historians Of French And German Literature Are Accustomed to Set Off A
Period, Or A Division Of Their Subject, And Entitle It "Romanticism" Or
"The Romantic School." Writers Of English Literary History, While
Recognizing The Importance Of England'S Share In this Great Movement In
European Letters, Have Not Generally Accorded it A Place By Itself In the
Arrangement Of Their Subject-Matter, But Have Treated it Cursively, As A
Tendency Present In the Work Of Individual Authors; And Have Maintained a Simple Chronological Division Of Eras Into The "Georgian,", The
"Victorian," Etc. The Reason Of This Is Perhaps To Be Found In the Fact
That, Although Romanticism Began Earlier In england Than On The Continent And Lent Quite As Much As It Borrowed in the International Exchange Of Literary Commodities, The Native Movement Was More Gradual And Scattered. It Never Reached so Compact A Shape, Or Came So Definitely To A Head, As In Germany Or France. There Never Was Precisely A "Romantic School" Or An All-Pervading Romantic Fashion In england.