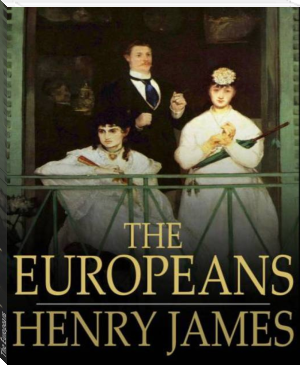 The Europeans is a short novel by Henry James. It is essentially a comedy contrasting the behaviour and attitudes of two visitors from Europe with those of their relatives living in the 'new' world of New England.

The tale opens in Boston and New England in the middle of the 19th century, and describes the experiences of two European siblings shifting from the old to the new world. The two protagonists are Eugenia Munster and Felix Young, who since their early childhood have lived in Europe, moving from France to Italy and from Spain to Germany. In this last place, Eugenia entered into a Morganatic marriage with Prince Adolf of Silberstadt-Schreckenstein, the younger brother of the reigning prince who is now being urged by his family to dissolve the marriage for political reasons. Because of this, Eugenia and Felix decide to travel to America to meet their distant cousins, so that Eugenia may "seek her fortune" in the form of a wealthy American husband.

All the cousins live in the countryside around Boston and spend a lot of time together. The first encounter with them corresponds to the first visit of Felix to his family. Mr Wentworth’s family is a puritanical one, far from the Europeans' habits. Felix is fascinated by the patriarchal Mr Wentworth, his son, Clifford, and two daughters, Gertrude and Charlotte. They spend a lot of time together with Mr. Robert Acton and his sister Lizzie, their neighbours.

Eugenia’s reaction after this first approach differs from Felix’s. She is not really interested in sharing her time with this circle. She doesn’t like the Wentworth ladies and does not want to visit them frequently. In contrast, her brother is very happy to share his spare time with Charlotte and Gertrude, spending hours in their piazza or garden creating portraits of the two ladies.