The Civilization Of The Renaissance In italy 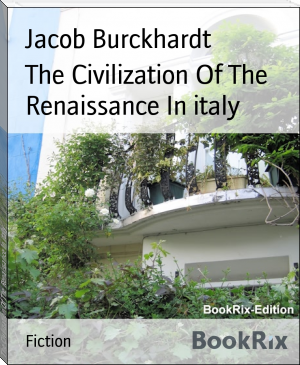 Carl Jacob Christoph Burckhardt (May 25, 1818 – August 8, 1897) was a historian of art and culture, and an influential figure in the historiography of both these fields. He is known as one of the major progenitors of cultural history.[1] Siegfried Giedion described Burckhardt's achievement in the following terms: "The great discoverer of the age of the Renaissance, he first showed how a period should be treated in its entirety, with regard not only for its painting, sculpture and architecture, but for the social institutions of its daily life as well."[2] Burckhardt's best known work is The Civilization of the Renaissance in Italy (1860).The son of a Protestant clergyman, Burckhardt was born and died in Basel, where he studied theology in the hope of taking holy orders; however, under the influence of De Wette he chose not to become a clergyman. He finished his degree in 1839 and went to the University of Berlin to study history,[3]