Taboo A Legend Retold from the Dirghic of Sævius Nicanor, with Prolegomena, Notes, and a Preliminary Memoir 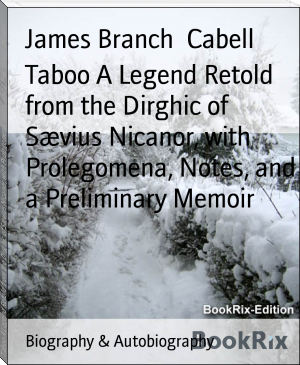 James Branch Cabell (/ˈkæbəl/; April 14, 1879 – May 5, 1958) was an American author of fantasy fiction and belles lettres. Cabell was well regarded by his contemporaries, including H. L. Mencken, Edmund Wilson, and Sinclair Lewis. His works were considered escapist and fit well in the culture of the 1920s, when his works were most popular. For Cabell, veracity was "the one unpardonable sin, not merely against art, but against human welfare."[