Mercedes of Castile; Or, The Voyage to Cathay (Illustrated) 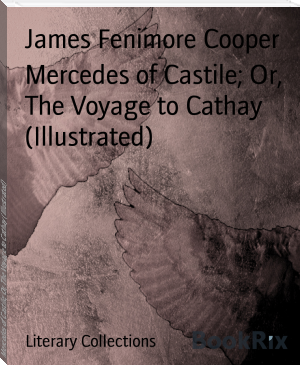 Whether we take the pictures of the inimitable Cervantes, or of that scarcely less meritorious author from whom Le Sage has borrowed his immortal tale, for our guides; whether we confide in the graver legends of history, or put our trust in the accounts of modern travellers, the time has scarcely ever existed when the inns of Spain were good, or the roads safe. These are two of the blessings of civilization which the people of the peninsula would really seem destined never to attain; for, in all ages, we hear, or have heard, of wrongs done the traveller equally by the robber and the host. If such are the facts to-day, such also were the facts in the middle of the fifteenth century, the period to which we desire to carry back the reader in imagination.
At the commencement of the month of October, in the year of our Lord 1469, John of Trastamara reigned in Aragon, holding his court at a place called Zaragosa, a town lying on the Ebro, the name of which is supposed to be a corruption of Cæsar Augustus, and a city that has become celebrated in our own times, under the more Anglicised term of Saragossa, for its deeds in arms. John of Trastamara, or, as it was more usual to style him, agreeably to the nomenclature of kings, John II., was one of the most sagacious monarchs of his age; but he had become impoverished by many conflicts with the turbulent, or, as it may be more courtly to say, the liberty-loving Catalonians; had frequently enough to do to maintain his seat on the throne; possessed a party-colored empire that included within its sway, besides his native Aragon with its dependencies of Valencia and Catalonia, Sicily and the Balearic Islands, with some very questionable rights in Navarre. By the will of his elder brother and predecessor, the crown of Naples had descended to an illegitimate son of the latter, else would that kingdom have been added to the list. The King of Aragon had seen a long and troubled reign, and, at this very moment, his treasury was nearly exhausted by his efforts to subdue the truculent Catalans, though he was nearer a triumph than he could then foresee, his competitor, the Duke of Lorraine, dying suddenly, only two short months after the precise period chosen for the commencement of our tale. But it is denied to man to look into the future, and on the 9th of the month just mentioned, the ingenuity of the royal treasurer was most sorely taxed, there having arisen an unexpected demand for a considerable sum of money, at the very moment that the army was about to disband itself for the want of pay, and the public coffers contained only the very moderate sum of three hundred Enriques, or Henrys-a gold coin named after a previous monarch, and which had a value not far from that of the modern ducat, or our own quarter eagle. The matter, however, was too pressing to be deferred, and even the objects of the war were considered as secondary to those connected with this suddenly-conceived, and more private enterprise. Councils