Conversations on Chemistry, V. 1-2 In Which the Elements of that Science Are Familiarly Explained and Illu 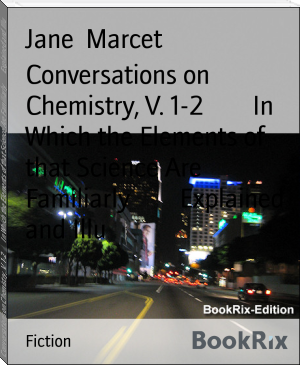 Jane Marcet was born Jane Haldimand in London on 1 January 1769, one of twelve children of wealthy merchant and banker Anthony Francis Haldimand (1740/41–1817) and his wife Jane (died 1785). Following Swiss tradition, she was educated at home with her brothers: her studies included Latin (essential for the sciences), chemistry, biology, and history, as well as topics more usual for young ladies in England.[1] Jane took over the running of the family at age 15, after her mother's death.[2] She managed the house and helped to bring up her younger siblings. Her younger brother William Haldimand (1784–1862) became a director of the Bank of England and a member of Parliament.[3] She also acted as her father's hostess, helping to entertain frequent parties of scientific and literary guests.[1] Jane developed an early interest in painting during a visit to Italy with her father in 1796, and studied with Joshua Reynolds and Thomas Lawrence.[3] Her artistic training later enabled her to illustrate her books.