**6 Chapter Sample Only** By: Jeff Schanz 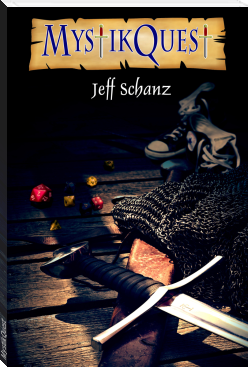 “Why is Switzerland in my kitchen?”

A tabletop, role-playing game called MystikQuest is a fun diversion from the disappointing lives of Wes Walker and his socially awkward, junior high friends, Marc and AJ.  It doesn’t matter to Wes that his friends think his game is a lame rip-off of “Lord of the Rings.”  Playing fantasy fiction is harmless fun until one fateful day when Wes discovers a dying creature in his treehouse, clutching an old arrowhead relic Wes dug up from his back yard.  The creature looks remarkably like a goblin.  Fiction soon becomes reality.

What Wes thought was an old arrowhead turns out to be an ancient magic artifact that defends itself by spinning elaborate, seemingly realistic illusions.  One moment, they’re all in AJ’s basement, entertaining other reluctant teens banished from the adult party upstairs, the next moment, a sunny, Swiss mountainscape appears where AJ’s kitchen should be.  It’s only an illusion, but it looks, sounds, smells, and feels real.

The level of inexplicability rises when Wes’s mysterious, long-lost Uncle Dru suddenly shows up claiming to be a real-life wizard assigned to protect the stone from a rogue member of his order.  On cue, a black-clad wizard with red eyes bursts in, initiating a wand duel that trap the six bewildered teens in the crossfire.   Stray wand blasts trigger the stone’s defense mechanism and the kids are magically transported into the fictional world of Wes’s MystikQuest game.

Chosen for them by the stone, the kids are thrust into ironic game avatars:  Meek and scrawny Marc is a charismatic, muscular warrior; quiet, autistic Schroeder is a transcendent druid; brainy, logical Wes is a mystical wizard; tall, stylish high-schooler Tyler is a diminutive hobbit; introverted emo Katie is a scantily-clad, voluptuous elf warrioress; and foul-mouthed, obnoxious AJ is the equally foul-mouthed and obnoxious half-ogre.  Adjusting to their new superhuman bodies and abilities, they must navigate the game to somehow conclude its story for the stone to release them.  But how can a bunch of nerdy, awkward teens who rarely exercise or go outside, much less know how to fight maniacal orcs and fire-spewing dragons, be expected to defeat an entire evil kingdom as daunting as (and ripped off from) Tolkein’s Mordor?  And how can they stop the red-eyed wizard from sabotaging the game and hunting them like prey?

With help from two of the game characters, a kindly, garrulous old wizard and an Aragorn-like heir in exile, the kids will battle giant spiders, drunken brutes, moronic orcs, plagiarized plots, and their own insecurities to somehow beat the game before they’re stuck in the stone’s illusion forever.

**This is a sample only**
For the full novel, please visit any of these sites.  Paperback also available.

The text has been updated! Final edits are done. New cover, too. Enjoy!
**If you do enjoy it, please let me know! :)
**This is now in the query process and will be eventually pulled from this site once I am contracted.

I’m not the greatest fan of fantasy but this one I definitely like!
It's easy to read and entertaining. Great job!!!

Thank you! :) That's extremely kind and very appreciated. I'm so glad you liked it.
And it's interesting that the book might appeal to someone normally outside the fantasy niche. Good to know. :)