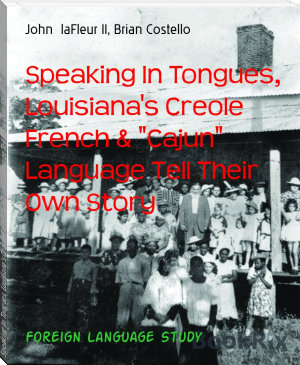 Adapted from a larger work,"Speaking In Tongues, Louisiana's Colonial French, Creole & Cajun Languages Tell Their Story" reveals Louisiana's remarkable Old World French & metis language traditions which continue to enchant America and scholars in all the world! But, along with the fame Cajunization has brought the State, historical distortion and misinformation fostered by mass-marketing and media conditioning myopia have suppressed and misrepresented Louisiana's historic French languages, cultural history and people as if uniquely Acadian in origin.
But, Louisiana's diverse multi-ethnic French languages, cultural traditions and people existed long before the arrival of the Acadians, who themselves were to become its beneficiaries!
Author-scholars John laFleur & Brian Costello, native-speakers respectively of Louisiana's Colonial Creole French & her sister tongue of Louisiana Afro-Creole with Dr. Ina Fandrich, provide a non-commercially scripted, first-time study of both the history and ethnological origins of Louisiana's diverse French-speaking peoples of the French Triangle and present the unvarnished results of their investigation, experience along with the evidence of modern and historical scholarship as seen through the franco and creolophonic traditions of Louisiana. A must read for all Louisiana cultural and linguistic afficionados!