The History Of England From The First Invasion By The Romans

To The Accession Of king george The Fifth Volume 8 By: John Lingard, Hilaire Belloc 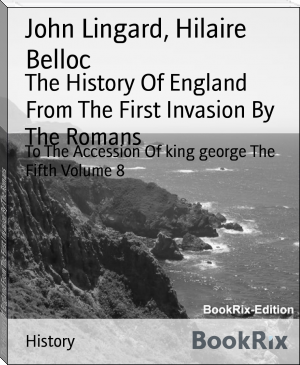 Rev Dr John Lingard (5 February 1771 – 17 July 1851[1]) was an English historian, the author of The History of England, From the First Invasion by the Romans to the Accession of Henry VIII, an 8-volume work published in 1819.Born in 1771 in St Thomas Street in Central Winchester to recusant parents, John Lingard entered the English College at Douai, France, to commence training for the Catholic priesthood. In the English College, he excelled in the humanities before beginning the study of theology. Narrowly escaping attacks by mobs at the time of the French Revolution upon war declaration between United Kingdom and France, he returned to England in 1793 where he concluded his theological studies and was ordained. He then taught philosophy and, in 1805, wrote a series of letters which, after their publication in a periodical, were collected as Catholic Loyalty Vindicated. In 1806 the first edition of The Antiquities of the Anglo-Saxon Church appeared, a development of his informal lectures.


Joseph Hilaire Pierre René Belloc (/hɨˈlɛər ˈbɛlək/; French: [ilɛʁ bɛlɔk]; 27 July 1870[1] – 16 July 1953) was an Anglo-French writer and historian. He was one of the most prolific writers in England during the early twentieth century. He was known as a writer, orator, poet, sailor, satirist, man of letters, soldier and political activist. He is most notable for his Catholic faith, which had a strong impact on his works, and his writing collaboration with G. K. Chesterton.[2][3][4] He was President of the Oxford Union and later MP for Salford from 1906 to 1910. He was a noted disputant, with a number of long-running feuds, but also widely regarded as a humane and sympathetic man. Belloc became a naturalised British subject in 1902, but kept his French citizenship (double citizenship)