A Modern History, From the Time of Luther to the Fall of Napoleon

For the Use of Schools and Colleges By: John Lord 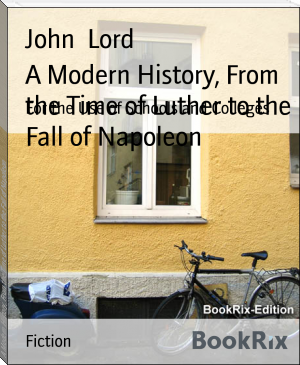 John Lord (10 September 1810 – 15 December 1894) was an American historian and lecturer. Born at Portsmouth, New Hampshire, he graduated from Dartmouth in 1833 and then entered the Andover Theological Seminary, where in his second year he wrote a series of lectures on the Dark Ages, which he delivered the next fall during a tour through northern New York. After graduating at Andover he became an agent for the American Peace Society. Though not ordained to the ministry, he was called to a Congregational Church at New Marlboro, Massachusetts, and then to one at Stockbridge, Massachusetts.