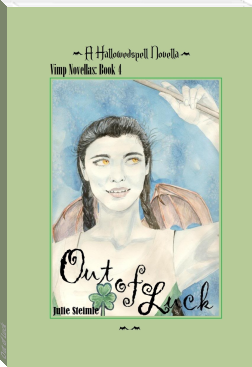 Is there such a thing as luck?
Eve McAllister doesn't think so. . . .
Which is a major faux pas during Cliffcoast's annual St. Patty’s Day Festival where good luck charms, green clothing, and haggis are the staple. (The enormous Scottish and Irish population has nothing to do with it--trust me.)
So when she starts to get the feeling that she is being followed, her family gets an unexpected windfall of luck, and clover begins sprouting everwhere she goes, Eve is a little more than creeped out.
And she should be.
Such things are signs of leprechauns--and leprechauns are nothing but bad news.
Out of Luck occurs a half a year after Eve McAllister discovered that she was not an ordinary girl, but a supernatural creature inclined to bite necks and cause mischief. However, Eve’s actual good nature leads her into fiascos almost worse than if she gave into her demonic appetites.
HallowedSpell Vimp Novella, Book 4