: THE BOOK OF TEA 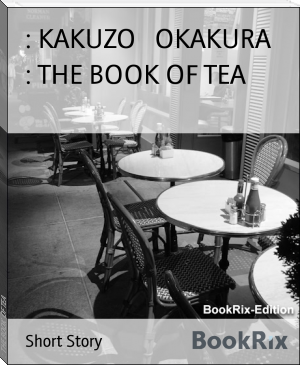 kakura Kakuzō (岡倉 覚三?, February 14, 1862 – September 2, 1913) (also known as 岡倉 天心 Okakura Tenshin) was a Japanese scholar who contributed to the development of arts in Japan. Outside of Japan, he is chiefly remembered today as the author of The Book of Tea.[1]Biography[edit]
Born in Yokohama to parents originally from Fukui, Okakura learned English while attending a school operated by Christian missionary, Dr. Curtis Hepburn. At 15, he entered Tokyo Imperial University, where he first met and studied under Harvard-educated professor Ernest Fenollosa. In 1889, Okakura co-founded the periodical Kokka.[2] In 1887[3] he was one of the principal founders of the Tokyo School of Fine Arts (東京美術学校 Tōkyō Bijutsu Gakkō), and a year later became its head, although he was later ousted from the school in an administrative struggle. Later, he also founded the Japan Art Institute with Hashimoto Gahō and Yokoyama Taikan. He was invited by William Sturgis Bigelow to the Museum of Fine Arts, Boston in 1904 and became the first head of the Asian art division in 1910.

Okakura was a high-profile urbanite who had an international sense of self. In the Meiji period he was the first dean of the Tokyo Fine Arts School (later merged with the Tokyo Music School to form the current Tokyo University of the Arts). He wrote all of his main works in English. Okakura researched Japan's traditional art and traveled to Europe, the United States, China and India. He emphasised the importance to the modern world of Asian culture, attempting to bring its influence to realms of art and literature that, in his day, were largely dominated by Western culture.[4]

His book on Asian artistic and cultural history, "The Ideals of the East with special reference to the Art of Japan (1903)", published on the eve of the Russo-Japanese War, is famous for its opening paragraph in which he sees a spiritual unity throughout Asia, which distinguishes it from the West

"Asia is one. The Himalayas divide, only to accentuate, two mighty civilisations, the Chinese with its communism of Confucius, and the Indian with its individualism of the Vedas. But not even the snowy barriers can interrupt for one moment that broad expanse of love for the Ultimate and Universal, which is the common thought-inheritance of every Asiatic race, enabling them to produce all the great religions of the world, and distinguishing them from those maritime peoples of the Mediterranean and the Baltic, who love to dwell on the Particular, and to search out the means, not the end, of life."

In his subsequent book "The Awakening of Japan", published in 1905 (after Japan's success in the Russo-Japanese war) he argued that "the glory of the West is the humiliation of Asia". This was an early expression of Pan-Asianism. In this book Okakura also noted that Japan's rapid modernization was not universally applauded in Asia ″we have become so eager to identify ourselves with European civilization instead of Asiatic that our continenta

Wow, that was awesome! Easily the best cover of this I seen so far, great job guys! I just did my own version of this song on my channel, would be amazing if anyone felt like having a listen :)