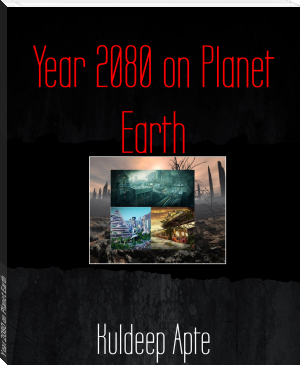 What will happen to human society in future with problems like religious intolerance, political and financial exploitation, unhealthy competition, greed for resources and pollution etc.This book projects the effect of these problems in future.

I) “A real human” is a story about Japanese young adult Takumi who loves Ayaka a humanoid robot and feel she is more human than his mother.

II) A Story of young girl Anandi from India and her Banyan tree plantation effort inside her house as outside environment is polluted in such an extended that no one can breathe.

III) An American story about a congressman who passed act of genes modification to avoid violence by supressing genes which stimulate hormones for aggression.

IV) “Catching a house gecko” is a story of Chinese Mr. Wěi, who fed his son home-cooked food and which caused food poisoning. As people restricted to eat only rationed food (Carbohydrates cakes with Hakka flavour and soup packet with some protein and few tablets of vitamins), to avoid punishment he has to catch house gecko.

V) A story from Nigeria “Revenge”, it is about Lkedimma and Reka. Lkedimma want to take revenge but realized that his act was more inhuman and saves Reka and help her to across border

VI) “Café de style de vin” is a French story about French coffee owner and Indian technician, both of them lake basic knowledge about each other’s work and innovate new idea of coffee serving.

VII) A Serbian Heavy vehicle driver Andeon wants escort service and he ended up meeting a girl from Serbia Taniya. Both of them were migrated after explosion of nuclear dirty bombs. Andeon and Taniya find synergic connection between each other.

VIII) Matheus a boy from Rio favela make a place into football league match as Robot substitute. Robot substitute is who imitate the action of a person. He failed to make into the team but learned a lesson

IX) “The Wall” is a story of a young girl Adin from Jerusalem and boy from Palestine Bashir, both of them leaving apart across border. They blame the wall for death of their pet pigeon Nargis.

This story definitely has a futuristic feel to it, but at the same time you included some human problem that have been around for many thousands of years. Good job.

I have read the first 3 chapters. So far, the story is good. I like the settings you created, the characters, and the storylines. I look forward to reading more.

Thanks for your appreciation, yours word are encouraging for me.