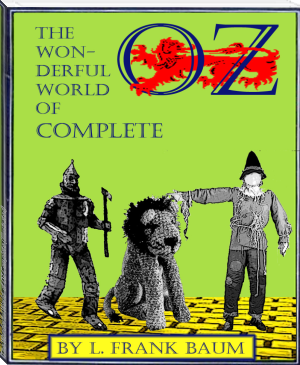 1 The Wonderful Wizard of Oz

Dorothy and her little dog, Toto, get swept into the Land of Oz by a cyclone. She meets a living Scarecrow, a man made entirely of tin, and a Cowardly Lion while trying to get to the Emerald City to see the great Wizard. Also reprinted by various publishers under the names The New Wizard of Oz and The Wizard of Oz with occasional minor changes in the text. It was originally written as a one-shot book.


2 The Marvelous Land of Oz 1904
A little boy, Tip, escapes from his evil guardian, the witch Mombi, with the help of a walking wooden figure with a jack-o'-lantern head named Jack Pumpkinhead (brought to life with the magic Powder of Life Tip stole from Mombi), as well as a living Sawhorse (created from the same powder). Tip ends up on an adventure with the Scarecrow and Tin Woodman to help Scarecrow to recapture his throne from General Jinjur's army of girls.


3 Ozma of Oz 1907
While traveling to Australia with her Uncle Henry, Dorothy is swept overboard with a hen named Billina. They land in Ev, a country across the desert from Oz, and, together with new-found mechanical friend Tik-Tok, they must save Ev's royal family from the evil Nome King. With Princess Ozma's help, they finally return to Oz.


4 Dorothy and the Wizard in Oz 1908
On her way back from Australia, Dorothy visits her cousin, Zeb, in California. They are soon swallowed up by an earthquake, along with Zeb's horse Jim and Dorothy's cat Eureka. The group soon meets up with the Wizard and all travel underground back to Oz.


5 The Road to Oz 1909
Dorothy meets the Shaggy Man, and while trying to find the road to Butterfield, they get lost on an enchanted road. As they travel they meet the rainbow's daughter, Polychrome, and a little boy, Button-Bright. They have all sorts of strange adventures on the way to Oz.


6 The Emerald City of Oz 1910
Dorothy Gale and her Uncle Henry and Aunt Em come to live in Oz permanently. While they tour through the Quadling Country, the Nome King is tunneling beneath the desert to invade Oz. This was originally intended to be the last book in the series.


7 The Patchwork Girl of Oz 1913
A Munchkin boy named Ojo must find a cure to free his Uncle Nunkie from a magical spell that has turned him into a statue. With the help of Scraps, an anthropomorphic patchwork doll, Ojo journeys through Oz to save his uncle.


8 Tik-Tok of Oz 1914
Betsy Bobbin, a girl from Oklahoma, is shipwrecked with her mule, Hank, in the Rose Kingdom of Oz. She meets the Shaggy Man there and the two try to rescue the Shaggy Man's brother from the Nome King. This book is partly based upon Baum's stage musical, The Tik-Tok Man of Oz, which was in turn based on Ozma of Oz.