A CRITICAL ESSAY ON SHAKESPEARE 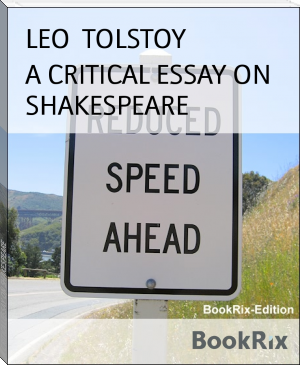 Count Lev Nikolayevich Tolstoy (/ˈtoʊlstɔɪ, ˈtɒl-/;[1] Russian: Лев Никола́евич Толсто́й, pronounced [lʲɛf nʲɪkɐˈlaɪvʲɪtɕ tɐlˈstoj] ( listen); 9 September [O.S. 28 August] 1828 – 20 November [O.S. 7 November] 1910), also known as Leo Tolstoy, was a Russian novelist, short story writer, essayist, playwright and philosopher who primarily wrote novels and short stories. Tolstoy was a master of realistic fiction and is widely considered one of the greatest novelists of all time. He is best known for two long novels, War and Peace (1869) and Anna Karenina (1877). Tolstoy first achieved literary acclaim in his 20s with his semi-autobiographical trilogy of novels, Childhood, Boyhood, and Youth (1852–1856) and Sevastopol Sketches (1855), based on his experiences in the Crimean War. His fiction output also includes two additional novels, dozens of short stories, and several famous novellas, including The Death of Ivan Ilyich, Family Happiness, and Hadji Murad. In addition to novels and short stories, he also wrote plays and philosophical essays on Christianity, nonviolent resistance, art and pacifism.