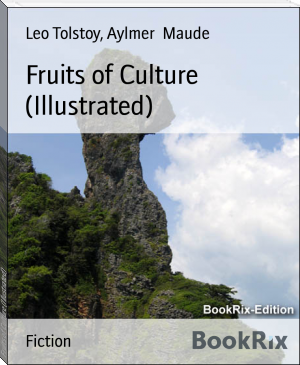 The Fruits of Enlightenment, aka Fruits of Culture (1889) is a play by the Russian writer Leo Tolstoy. It satirizes the persistence of unenlightened attitudes towards the peasants amongst the Russian landed aristocracy. In 1891 Constantin Stanislavski achieved success when he directed the play for his Society of Art and Literature organization.

Tolstoy created the first, incomplete draft of the play in 1886, along with The Power of Darkness. Three years later, his children and wife persuaded him to complete the manuscript sufficiently for a house performance in Yasnaya Polyana. Tolstoy initially denied the proposal but quickly took the lead in directing the amateur actors; the cast included twenty six of his children, two nieces, a court prosecutor from Tula and a judge from Moscow. This first performance was held December 30, 1889. According to Sergey Tolstoy, the 1889 play deliberately reflected the realities of Yasnaya Polyana and the neighboring country estates, even using the real names of Tula gentry for the stage characters (these names were replaced with purely fictitious ones later). The first performance washed out the border between imaginary characters and the real personalities playing them, removing the fourth wall between actors and the audience; it was never reproduced in this form ever since. The audience received the play well, and it was reproduced by Tula amateurs, including Tatyana Tolstaya, in April 1890, with the proceeds donated to a local orphanage. The second performance was attended by Maly theatre actor Alexander Yuzhin and independent theatre director Vladimir Nemirovich-Danchenko.