MEMOIRS OF THE COURT OF ST. CLOUD 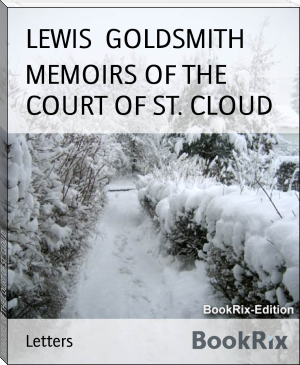 Lewis Goldsmith (c.1763 – 6 January 1846) was an Anglo-French publicist of Portuguese-Jewish extraction. He is thought to have been born in Richmond, Surrey.In 1801, Goldsmith published The Crimes of Cabinets, or a Review of the Plans and Aggressions for Annihilating the Liberties of France and the Dismemberment of her Territories, an attack on the military policy of Pitt. Soon afterward, in 1802, he moved from London to Paris. There Talleyrand introduced him to Napoleon. With Napoleon's assistance, Goldsmith established the Argus, a biweekly publication in English reviewing English affairs from a French point of view.

In 1803, according to Goldsmith's own account, he was entrusted with a mission to obtain from the Comte de Provence, the head of the French royal family and subsequent King Louis XVIII, a renunciation of his claim to the throne of France in return for the throne of Poland. The offer was declined. Goldsmith says he then received instructions to kidnap Louis, or to kill him if he resisted. Instead, Goldsmith revealed the plot. Until 1807, however, when his Republican sympathies began to wane, Goldsmith continued to undertake secret service missions on behalf of Napoleon.

Goldsmith's hand has been seen in the Revolutionary Plutarch of 1804–5, an emigré work edited in London, and with a title harking back to the British Plutarch of Thomas Mortimer. That would imply that Goldsmith was by then already playing a double game.[1]