By: Lorenzo Scupoli, St. John of the Cross 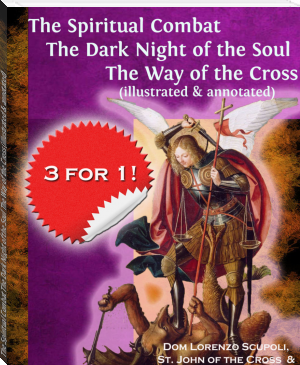 For over 400 years, Fr. Scupoli's the Spiritual Combat has provided time-tested strategies for achieving victory over the flesh and the devil, and is acknowledged to be one of the greatest guides to guide one to virtue in time of temptation. St. Frances de Sales carried this little work wherever he went, consulting it often.

The Spiritual Combat is one of the all-time greatest and best-known classics on the spiritual life and is a book that will inspire and instruct today just as it has for over 400 years.

+Dark Night of the Soul -

The Dark night has been described as a point of deep "spiritual crisis" and the pathway Fray John lays out isn't merely to recover but to thrive and experience true union with God.

This is mysticism with a purpose, to change your life right now, to become more like Christ every day. This is no bleak night but a bright light of hope lit on a clear path to living holiness by the premier spiritual master, St. John of the Cross.

In a homily commemorating the martyrdom of St. John the Baptist, Pope Francis remarked "I think of the dark night of the soul of Blessed Teresa of Calcutta” and is inspired with the hope only Christ can give each of us.

Together St. John of the Cross and St. Teresa of Avila are considered the founders of the Discalced Carmelites.

St. Alphonsus Liguori's method is the most treasured way of praying the stations ever to bless Christendom. The Saint is also the creator of the classic "The Glories of Mary."

The pious practice has been around since Christians visited the Holy Land the the 5th Century and emulated the actual way of the cross. In the 14th century, to remind Catholics of the ties to the Holy land the Franciscans promoted the devotion and ever since it has become an annual Lenten tradition.

Book Recommendation
One Heart Is All I Have. Part 1

The GDR no longer exists, but people continue to live ruined lives.

The same is true for Eduard, a former political prisoner who, more than thirty years after the reunification of Germany, cannot free himself from the horrors of life in the GDR. His journey has included failed love, being ...

Romy van Mader has written the visionary novel to touch ...