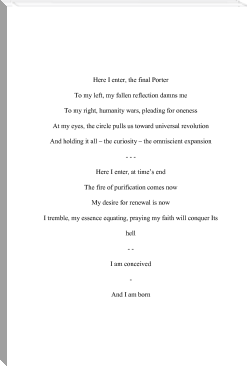 Global war rages. In the chaos, the world's best exiled pilots strive to deliver peace on their own terms. Their brash leader is a tragic young poet with a growing power to end it all. This Porter's edginess escalates into madness as his visions and demons drive him to the depths of universal truth. In unraveling his epic purpose, hordes of dark and light warriors sway his destiny. The darkness - led by a harbinger beast of the greatest evil. The light - led by the Porter's mighty lost brother. The heroes suffer the scourge of war as lost loves, heartbreaking reunions, and martyrdoms transform their psyches.

The Porter's psychosis is broken by a passionate romance with his true love. Though the darkness continually tears them apart, she is his sanity and his savior. While his destiny is to save mankind, he fights only to be with her.

The Porter's haunting journey ends facing the antigod of his own creation. The final revelation is rattling - questioning love - - challenging existence to its core.