(The first two chapters of a published book available on Amazon) By: Lynne North 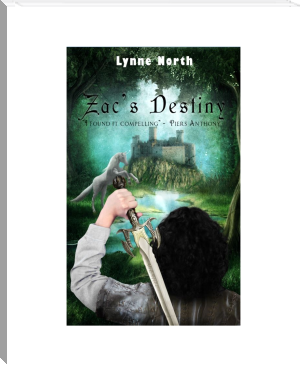 Zac is a fifteen year old stable boy whose life is turned upside down when he finds himself in the midst of demons, magic and a perilous quest. The land around Albemerle castle is under attack, and the only hope of survival for Zac and the people he loves is to find the great wizard, Aldric.
Men have already died trying.
Strange dreams mark the beginning of Zac’s life changing events. Armed with a magic sword, ring and crystal, he sets out with a group of soldiers to find Aldric. Demon attack almost ends Zac’s quest as soon as it begins.
Zac refuses to give up, and soon finds himself accompanied by unusual travelling companions. Many dangers bar their way. Only Zac’s determination and the unexpected help he receives can make it possible to find and free Aldric, and return for the final battle to save the land…

...whitezephyra. You've made my day. Zac's Destiny is available for 86p/$1 on Kindle, and even if you don't have a Kindle reader you can download one free from Amazon to read cheap/free kindle books on your PC. Well worth checking that out! Thanks again.

Wish I could buy it from Amazon, but no money to do so for a long time to come, I would loved to read more of this story and any others you have wrote! Your are a great writer and story teller and I will gladly recomend this book to young readers!

for saving this to your favourites, Horselover!

it is a good book to read

it is a good book to read

Your comments are much appreciated. Glad you enjoyed the sample of my book which is available on Amazon.

...I appreciate your support!

I think it reminds me more of David Eddings and his first book - I'm curious to see how Zac develops into an eventual Hero.

This is an exciting story =) When I was a kid I'd get lost in so many fantasy books like this - David Eddings and Terry Brooks especially. This reminds me of it, or maybe a younger Terry Goodkind.

This is good stuff =) I'd definitely recommend it to a middle-grader.

...Praise indeed. You have just likened my work to three of my favourite writers! :-)

Please feel free to comment on the opening to Zac's Destiny.