A LETTER TO GROVER CLEVELAND ON HIS FALSE INAUGURAL ADDRESS

THE USURPATIONS AND CRIMES OF LAWMAKERS AND JUDGES, AND THE CONSEQUENT POVERTY, IGNORANCE, AND SERVITUDE OF THE PEOPLE By: LYSANDER SPOONER 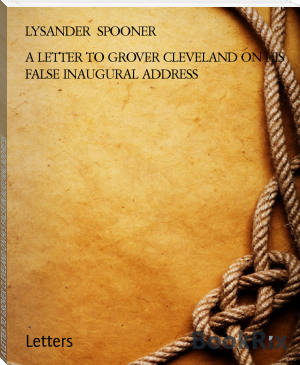 Lysander Spooner (January 19, 1808 – May 14, 1887) was an American individualist anarchist, political philosopher, Deist, Unitarian abolitionist, supporter of the labor movement, legal theorist, and entrepreneur of the nineteenth century. He is also known for competing with the U.S. Post Office with his American Letter Mail Company, which was forced out of business by the United States government.

lay off the cigarettes

Could someone explain how we know the composition of the air on the planet so long ago? Is it inferred from things llike which oxygen-processing creatures existed (which, I mean, I'm also not clear on how we know so much about ancient bacteria), or measured directly somehow?

87k views is not trending. How much did you pay YouTube