The Sceptre of Eternity By: Mala Mukherjee 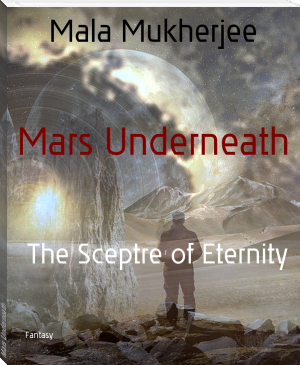 The story is set in a futuristic world when terra-formation and colonization of Mars have been completed; but human explorers failed to cross the other side of Mount Olympus, the highest mountain of the solar system. There is a secret passageway, which opens up in Twenty Earth Years. Beyond the Olympus, an unknown land awaits, from where Eagle King and his retinue come to the Martian South in search of slaves. However, within the volcano, there are lives and cities, completely unknown to human explorers. The original inhabitants of Mars have set up a league in demand of an alien free planet, which shakes the very foundation of human colonies on the red planet.

Set in the two planets, two different worlds, the first part of the trilogy depicts Geologist Erik Muller's journey to the unknown part of Mars. Erik's girlfriend Volga promised to save an Old Martes (original inhabitant of Mars) girl from torture and enslavement. Erik and Volga tried to fulfill their promise and encountered the King of Terra Aquillan in an open combat. However, they lost and Erik was detained by the King and Volga disappeared mysteriously.

Erik lost his identity in a strange planet and twenty years later his luck gave him an opportunity to return to the Earth. In the midst of political turmoil and chaos; Erik found himself in overwhelming odds. Though he managed to secure the new Eagle King's favor but faced various odd trials and finally won. The King gave him an opportunity to return to Earth, but can he meet again his colleagues or he will remain forever on the Red Planet?

This Book is Part of a Series "Mars Underneath"
All Books in this Series: