OF DOGS AND MEN - A myth therapy 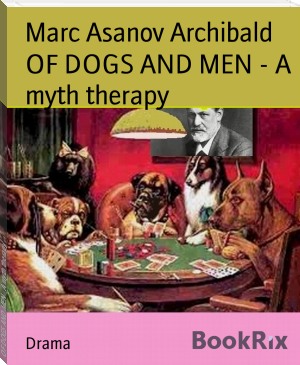 A group of pseudo scientists assemble to devise a revolutionary experiment that could change the concept of creation and evolution of species. The experiment would create the bases of a sudden transformation of a dog into a man. The scientists discuss issues that may concern such transformation from a dog into a man such as feeding, sex habits, and bathroom routines. Freud, Darwin and God are cited copiously to support such a sudden metamorphosis. At the end of the convention the scientists are preparing manuals to be used by people that would like to transform their dog into a man.
Bruce and Estelle, the owners of a German shepherd dog, named Rex are some of the dog masters that receive those manuals by mail. They find out that Rex’s dream is in fact to become a superman. Bruce and Estelle transform their backyard into a classroom; the table is full of books ready for reading and two posters depicting a dog male and a dog female anatomy on the back wall. They begin teaching Rex elementary things such as vocabulary, numbers, sexual behavior and manly attitude towards women. Estelle especially spends time showing Rex her body, letting him touch her breasts, and all. Bruce and Estelle also discuss other topics such as the history of humanity, time, religion, sins, and facts of life. What started as a routine class following the “scientific” manuals becomes slowly a hodge-podge of useful teaching coupled with “information waste”. Estelle talks of a possibility to see one day her mom pass by and find out that Rex is not anymore a dog. At that stage Rex has enough knowledge to stop listening to his two tutors and become involved in expressing original ideas and also declare openly his love for Estelle, which infuriates Bruce. During the lessons Rex’s appearance changes slowly into a man. Almost at the end of this transformation process a woman wearing circus like huge prosthetic legs approaches the three protagonists. She tells them that their attempt to transform a dog into a man is illegal and threatens to report them to the police. Bruce and Estelle ignore her. Only Rex becomes apprehensive that police may end his dream to become a full-fledged man. As physical transformation of Rex into a man becomes obvious, Estelle asks him to change his “fur coat” with a cardigan she knitted meanwhile. As expected, Estelle’s mom comes by one day and is pleasantly surprised by Rex’s transformation into a gentleman though she finds Rex’s declared passion for Estelle very disturbing. She runs out of the courtyard into the house with the pretext of taking a nap. Not long after that a group made out of four policemen and a priest and exhibiting a sturm-und-drang behavior push through the door and demand explanations about “the metamorphosis situation”. The priest is the one that reads the bible paragraphs that describe the human-dog coitus as being a forbidden sin. A “Scientific” policeman inquires about Bruce’s qualification to transform dogs into men.