THE LETTERS OF "NORAH" ON HER TOUR THROUGH IRELAND

BEING A SERIES OF LETTERS TO THE MONTREAL "WITNESS" AS SPECIAL CORRESPONDENT TO IRELAND By: MARGARET DIXON McDOUGAL 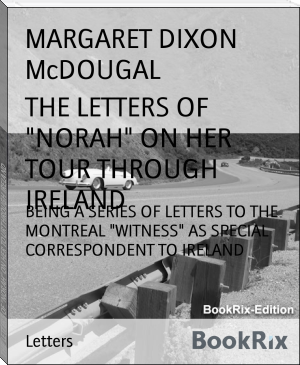 On January 27th I bade good-bye to my friends and set my face resolutely towards the land whither I had desired to return. Knowing that sickness and unrest were before me, I formed an almost cast-iron resolution, as Samantha would say, to have one good night's rest on that Pulman car before setting out on the raging seas. Alas! a person would persist in floating about, coming occasionally to fumble in my belongings in the upper berth. Prepared to get nervous. Before it came to that, I sat up and enquired if the individual had lost anything, when he disappeared. Lay down and passed another resolution. Some who were sitting up began to smoke, and the fumes of tobacco floated in behind the curtains, clung there and filled all the space and murdered sleep. Watched the heavy dark shelf above, stared at the cool white snow outside, wished that all smokers were exiled to Virginia or Cuba, or that they were compelled to breathe up their own smoke, until the morning broke cold and foggy.