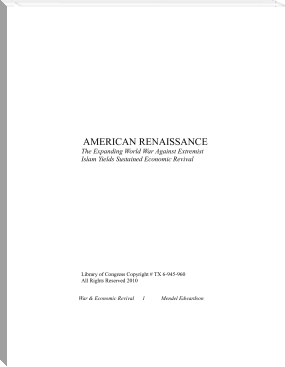 American Renaissance is the first foundation of an evolving,
Bible faithful, new view from Israel. A spiritual earthquake, its
under-the-surface action is the cause of America's deepest
transformation since the nation's founding. This is it! The
USA's current, but still elusive root problem and solution
direction- not yet on many radar screens.

Hidden, but in process, is a morphed America with a fresh,
revived vision along with an actionable political formula.
It is life beyond the last Judeochristian era- which is
proved to have “ended” in 1963! There has been a 40 year
Biblical delay until today's distressing realities have become
evident. The New Millennium is already a New Way-
nationally and individually. American Renaissance is the
shocking explanation with the political reformulation that
alters everything including: