Men and Women Meeting In The Air By: Mendel Edwardson 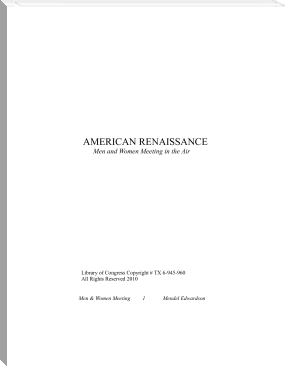 American Renaissance is the first foundation of an evolving, Bible
faithful, new view from Israel. A spiritual earthquake, its under-
the-surface action is the cause of America's deepest
transformation since the nation's founding. This is it! The USA's
current, but still elusive root problem and solution direction- not
yet on many radar screens.

Hidden, but in process, is a morphed America with a fresh,
revived vision along with an available, actionable, political
formula. It is life beyond the last Judeochristian era- which is
proved to have “ended” in 1963! There has been a 40 year
Biblical delay until today's distressing realities have become
evident. The New Millennium is already a New Way- nationally
and individually. American Renaissance is the shocking
explanation with the political reformulation that alters everything.

AMERICAN RENAISSANCE, Men and Women Meeting In The Air,
shows the need for a critical retake of so called men/women “progress”.
This is not a standard self-help product. It goes way beyond. The
interactions of men and women on earth should be "reflecting"
the love relationship between God, our "husband" toward His planet
earth human group as His "spouse"; for whom God has always been
desperate for intimacy. Up to now, time honored scripture has been
trampled upon and a new, sounder direction is now uncovered.