Islam! What are the Veil, Divorce, and Polygamy for?

A Dialogue between a Western Orientalist and a Muslim Savant By: Mohammad Amin Sheikho, A. K. John Alias Al-Dayrani 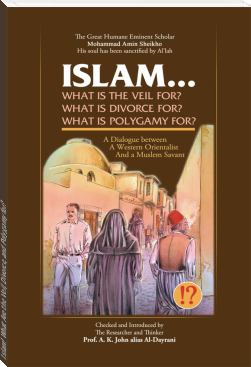 Lately, Some subjects like the veil, Polygamy, and Divorce in Islam have become objects of discussion and dispute upon which the mass media, especially the western ones, shed light.
What is the veil, Polygamy, and Divorce in Islam?
In this Book:
A Dialogue between a Western Orientalist and a Muslim Savant about:
- The Verity of the Philosophy of the Veil in Islam
- The Importance of Marriage Contract
- The Verity of Polygamy in Islam.
- The Verity of Divorce in Islam
Is it the cover screening only the hair? Or it is the whole cover screening all the body with the face?
What is the wisdom behind it? And what are the Qur’anic proofs (verses) that indicate it and decide its nature?
O Islam… What is divorce for?! What is more than one wife for?!