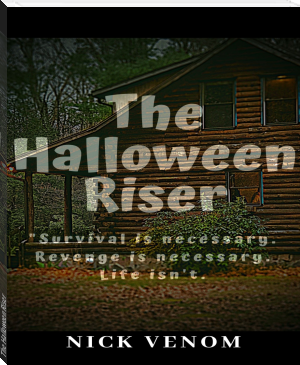 A man dressed in his own blood trudged on a gravel road. Police sirens fill the air, ricocheting off every molecule of air. His clothes are torn apart and stained with blood. A single-bladed glove dripping blood and his breathing became erratic. On his belt is a switchblade and spots for daggers. He struggled to walk through the gravel road and collapsed due to blood loss. He collapsed in East Emerald Forest Preserve.

A figure appeared from the darkness. The figure looked around the surroundings. Max laid on the gravel road with trees lining both sides. The gravel smacked Max’s unconscious face. The wind kept silent as the figure grabbed Max and dragged him away from the road. The figure then took Max to a cabin deep into the forest. The only sounds that could be heard were the chirpings of grasshoppers. The sky, distraught and unruly, illuminated the path to the cabin. They got to the cabin and the figure struggled to open the door. The figure dropped Max and pulled all its weight against the door. The figure pushed the door and fell to the ground inside the cabin. The smell of the cabin released and penetrated the air. A foul and disgusting scent of bodies rotting filled the thin air. The inside of the cabin only had a couple of items of furniture with a large table and a couple of chairs surrounding the table. There was a large mat glued onto the floor. The peeling paint gave off a feel similar to that of an abandoned house.

Max came back to reality. He ended up sleeping on the table in the cabin. Joyce used the floor, away from the open hatch. Max took a peek around before deciding to move. He groaned as he moved his bandaged leg over the air and onto the floor. He drew his other leg and with a pinch of pain, he jumped and landed with a “thud”. Joyce woke up immediately with her dagger that she cradled in her arms. Her skin has patches of blood from obvious contact with the dagger. Her hair was a mess, but it wasn’t any different from when he first met her. Her baggy clothes and shapeless body panned her as a shut-in. “Oh, you’re…” Her words were interrupted by a yawn. “Sorry. Where are we going?” She asked.