How a Queer Paster Changed the Church By: Nulf A. Schade-James 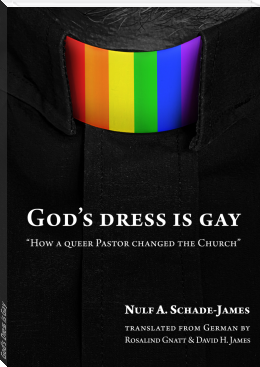 Nulf A. Schade-James was born in 1958 in Gedern, Hessen. He studied in Frankfurt and Heidelberg before starting his pastoral internship in Wiesbaden and Kairo. A member of the group Homosexuality and Church, he has been campaigning for the rights of homosexual brothers and sisters of faith since the 1980s. For years he was admired on the cabaret stage as Greta Gallus, Dame of Sodom without Gomorrah. He plans further appearances during a reading tour for this book.

The press repeatedly picked up on Schade-James’ commitment, according to Spiegel and FAZ. In 2002 the gay magazine hinnerk listed him at #41 in the TOP 100 GAYS THAT ARE MOVING GERMANY. A detailed interview with him was published in 2014 in the book Stadtgesprache Frankfurt a.M. by Gmeiner Verlag.
Today Pastor Schade-James lives and works in Gallus, Frankfurt, together with his husband and his foster son. In 2015 he married his husband for the third time in New York, and in 2018, finally, in Germany. “

Book Recommendation
One Heart Is All I Have. Part 1

The GDR no longer exists, but people continue to live ruined lives.

The same is true for Eduard, a former political prisoner who, more than thirty years after the reunification of Germany, cannot free himself from the horrors of life in the GDR. His journey has included failed love, being ...