120 PRAYERS TO DEFEAT THE ACTIVITIES OF CHRISTIAN WITCHES

KILL THE REBEL IN YOU! By: Olusegun Festus Remilekun 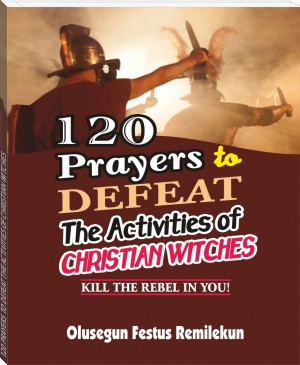 For rebellion is as the sin of witchcraft…..

In today’s world, we have a lot of Christians who are witches and wizard because of the spirit of rebellion. A witch is not just someone who flies about in the night, looking out for who to destroy and whose blood to suck. God is saying here that no man or woman that is rebellious is permitted to live.

Rebellion is simply a rejection of orders and instructions. And when you reject instructions, you are set for destruction. Let’s watch it! In the last days, there will be a lot of releases of the spirit of rebellion. It will gather in too many creeping forms. You will not be caught! Rebellion is the spirit of arrogance growing among people in all aspect of life. This spirit is attacking the church, government, school, workplace, and family cycle.

Friends, rebellion is of the devil and demonic, don’t go for it! In any home where divine order is not accepted, peace will never reign. There are rebellious church leaders, wives, and husbands, who don’t believe in order. When you don’t believe in order, you are a rebel. You may call it reaction, but God calls it rebellion! And He says it is like the sin of witchcraft. So, if you are into rebellion, you’re a witch! You don’t need to curse a rebel, he’s already cursed.

Exodus 22:18, says that no witch is permitted to live. He or she must die! This is not talking about the second death. It is judgmental death. The end of rebellion is death. Many marriages, businesses, families are spiritually dead today because of the activities of rebellion spirit.